Please to see the cars back to life! Steering wheel look fantastic
The sultan of swing
Top 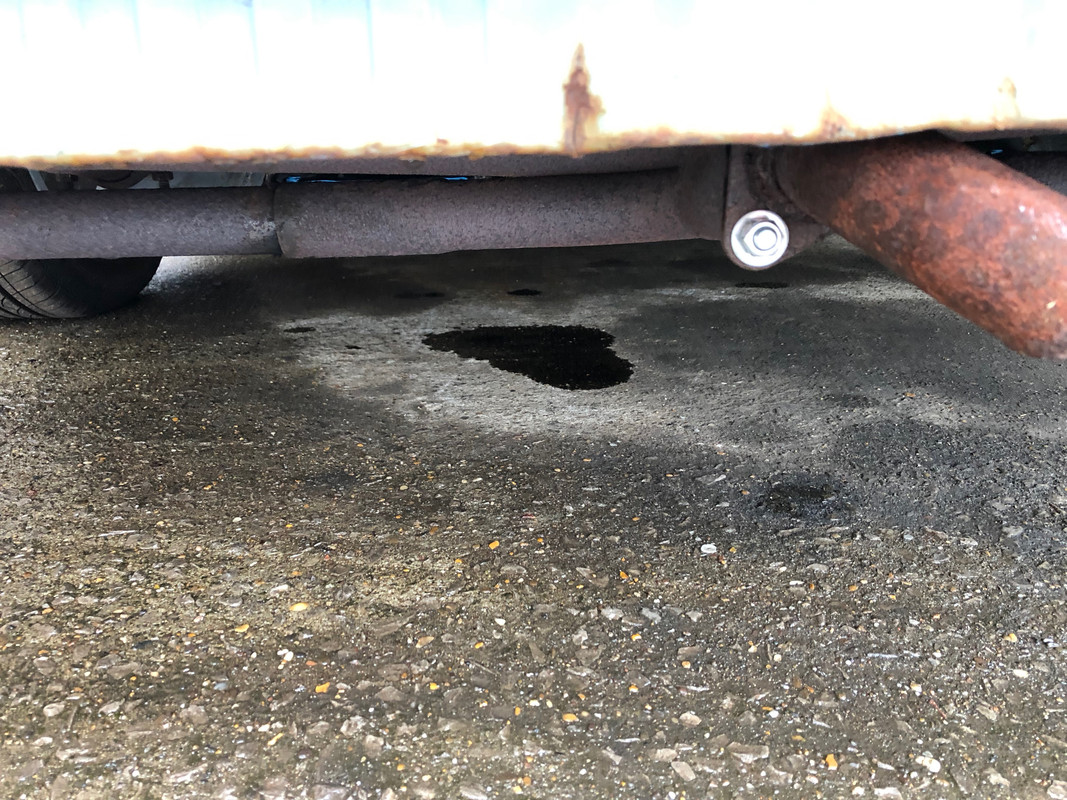 Don't know yet, that was only after 5 minutes running. It's going to be an engine out job, so hurriedly booked into the workshop for the end of next week.
The upside is it just needs balljoint boots (again) for an MOT, and I'm also going to swap the Beetle gearbox out for the newly rebuilt Type 3 one.
And that will mean I can finally select reverse gear.
http://cjmotors.info/

Well, what a fuck up that was. No surprise really I suppose.
Engine out to swap the oil cooler, that was the easy job. Oil cooler had split along the bottom edge, supposedly pressure tested so waiting on a refund for that now.
Anyway, replacement cooler and new seals fitted so fingers crossed. 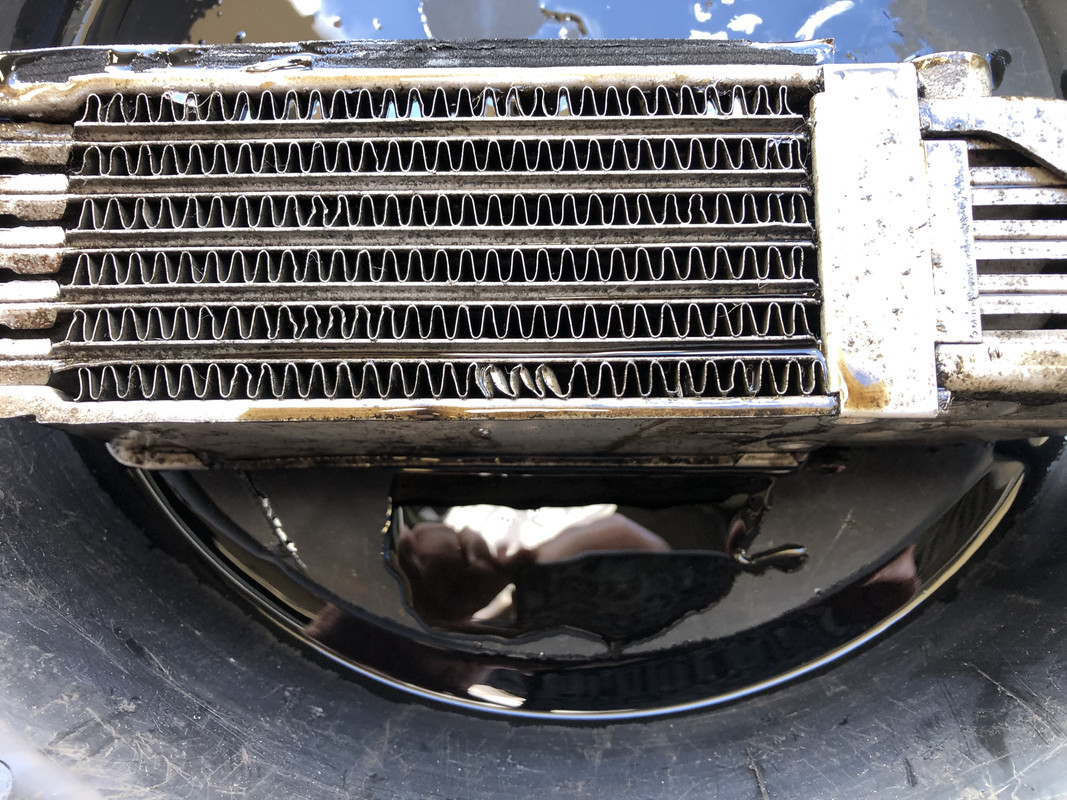 While the engine was out, it was a good time to replace the dodgy beetle gearbox with the newly rebuilt type 3 one along with a short axle conversion. 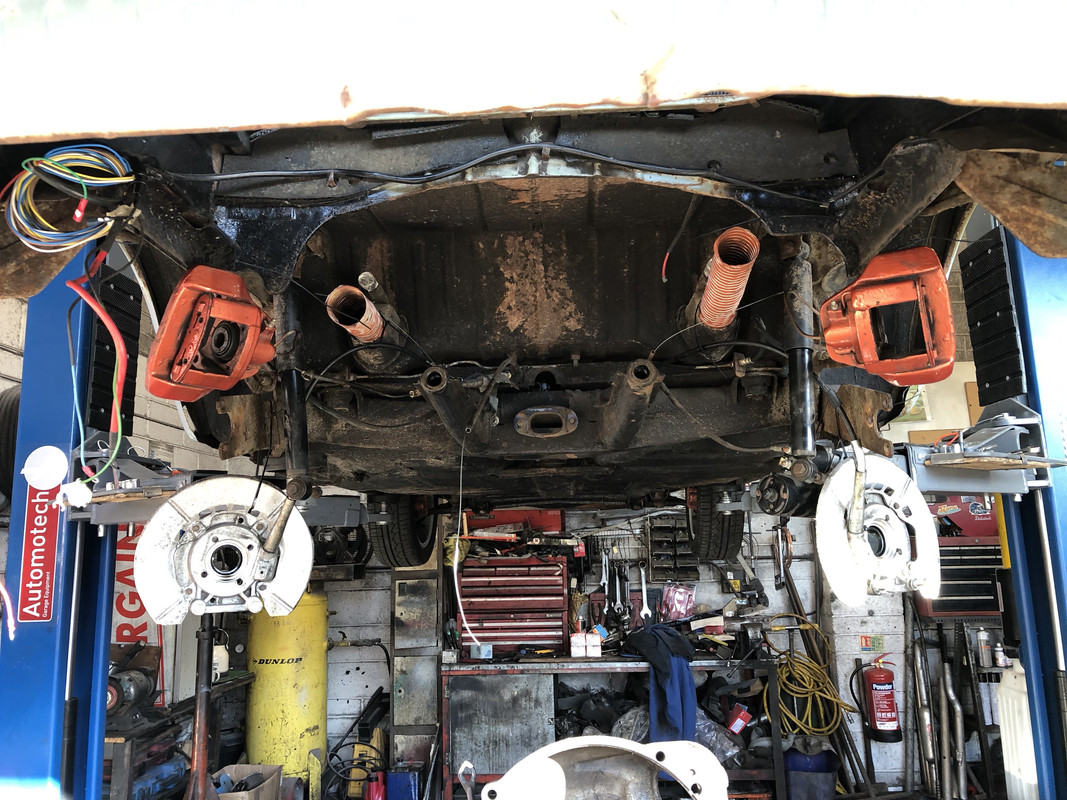 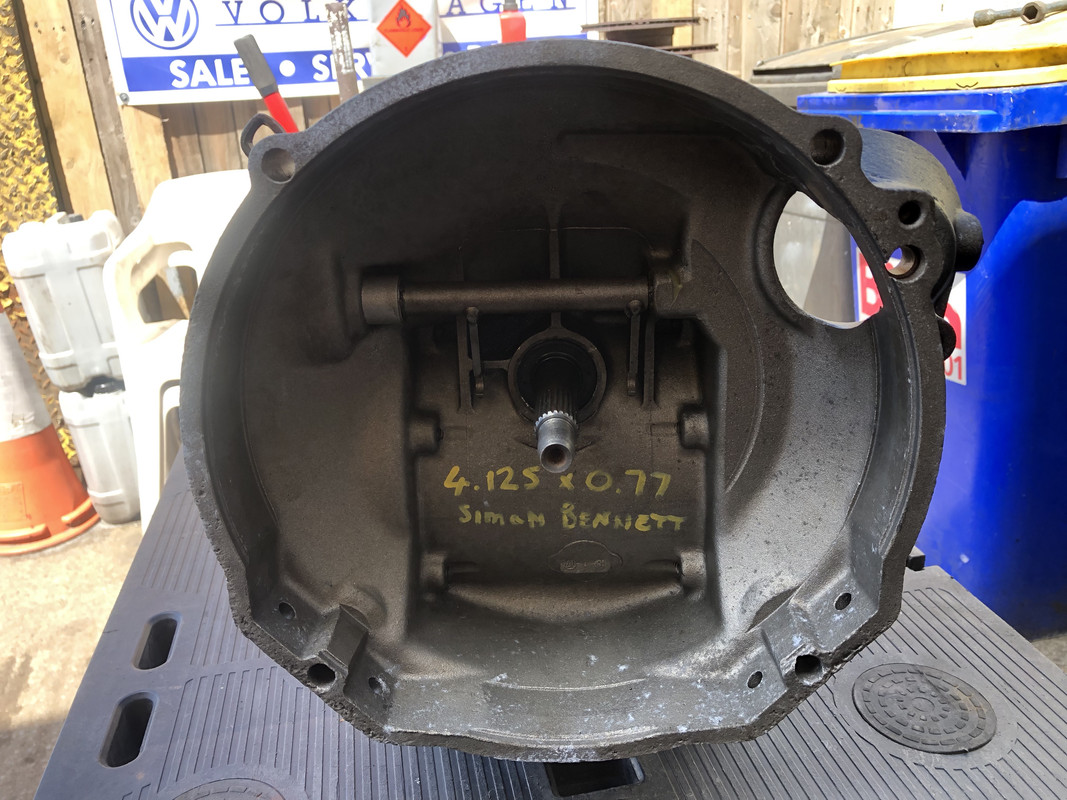 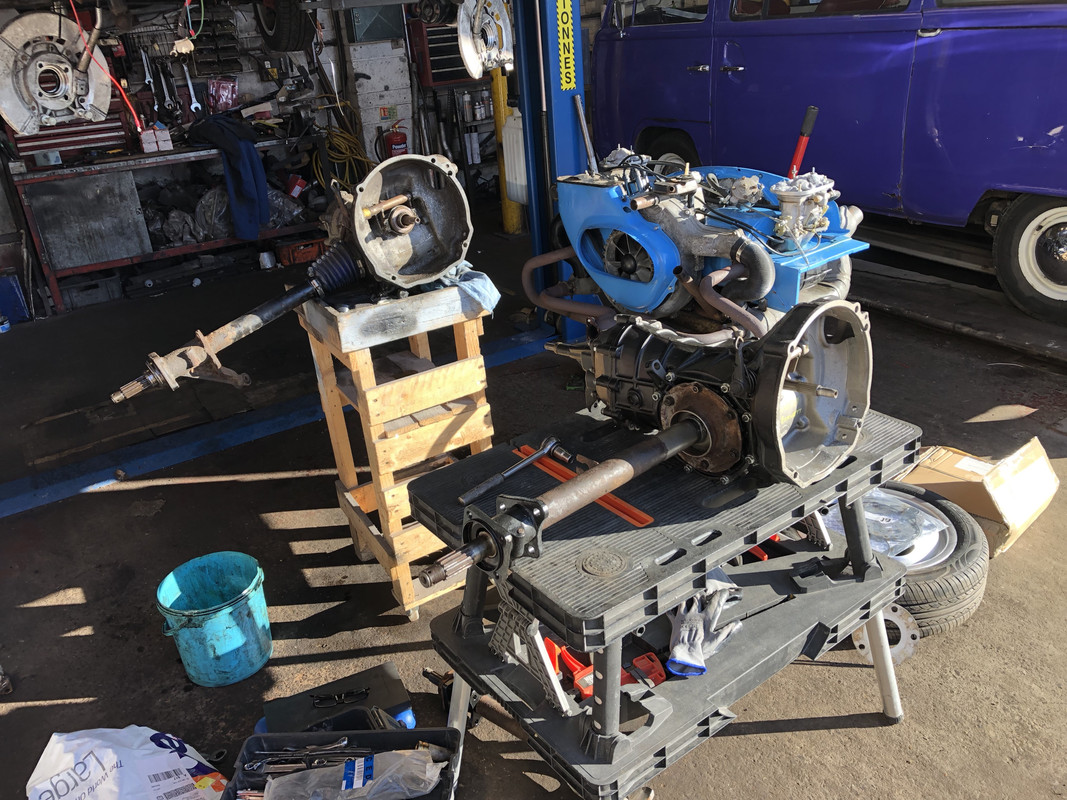 That's where all the "fun" started.
'67 Variant or Porsche 944 rear brakes don't fit short axles.....
No pics I'm afraid as I was so pissed off, suffice to say that the hub nut won't screw onto the axles.

So after many hours and phone calls, a CSP rear disc conversion duly arrived this morning. I was pleasantly surprised how easily this was fitted to be honest.
Well, after I had worked on the axle threads for a couple of hours. 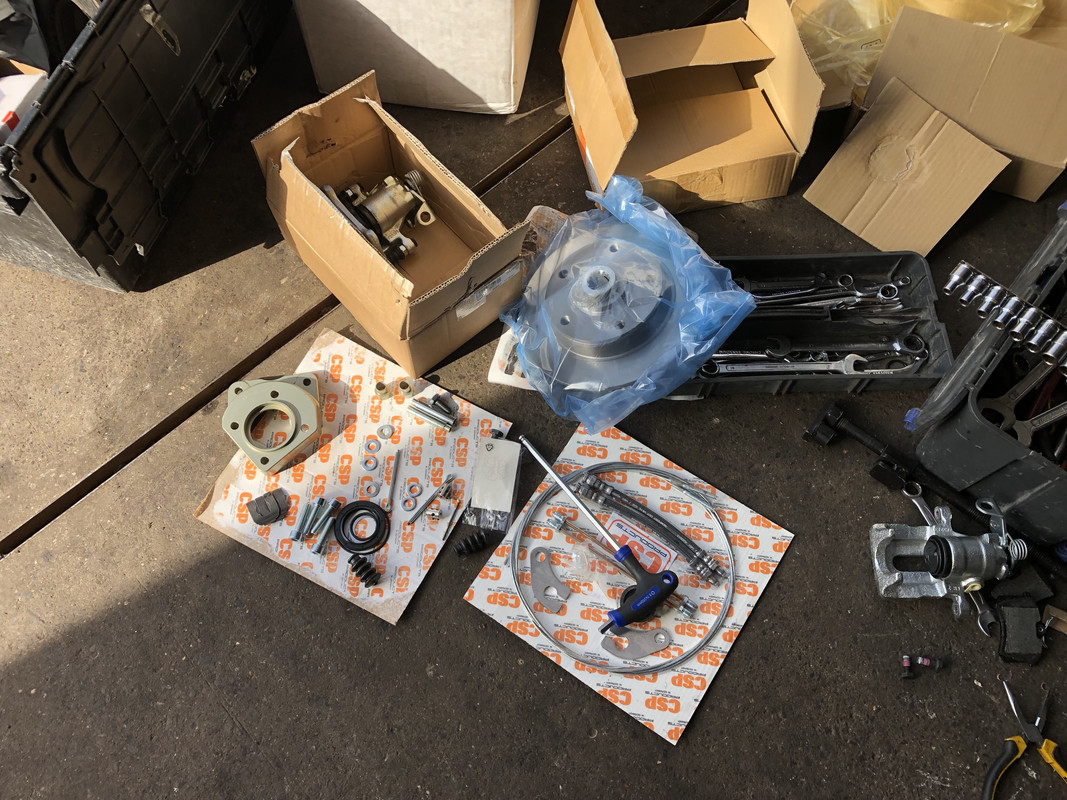 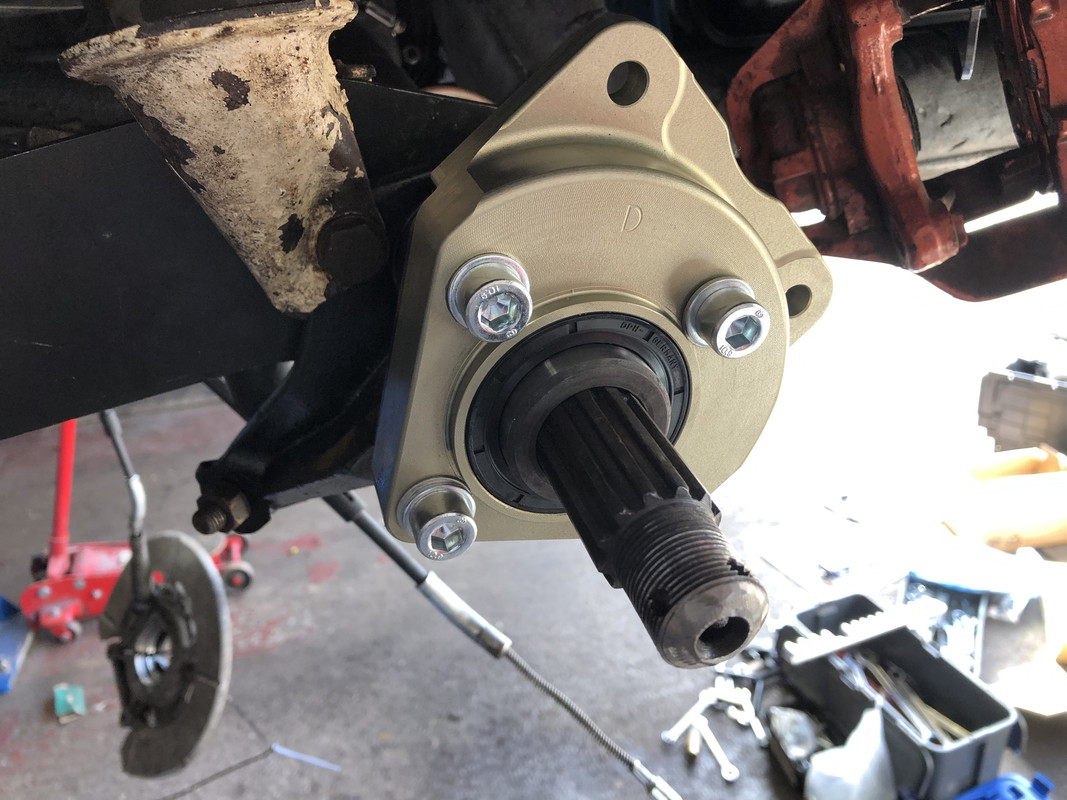 I almost forgot to mention the new Transporterhaus dropped adjustable spring plates and rubbers as well. 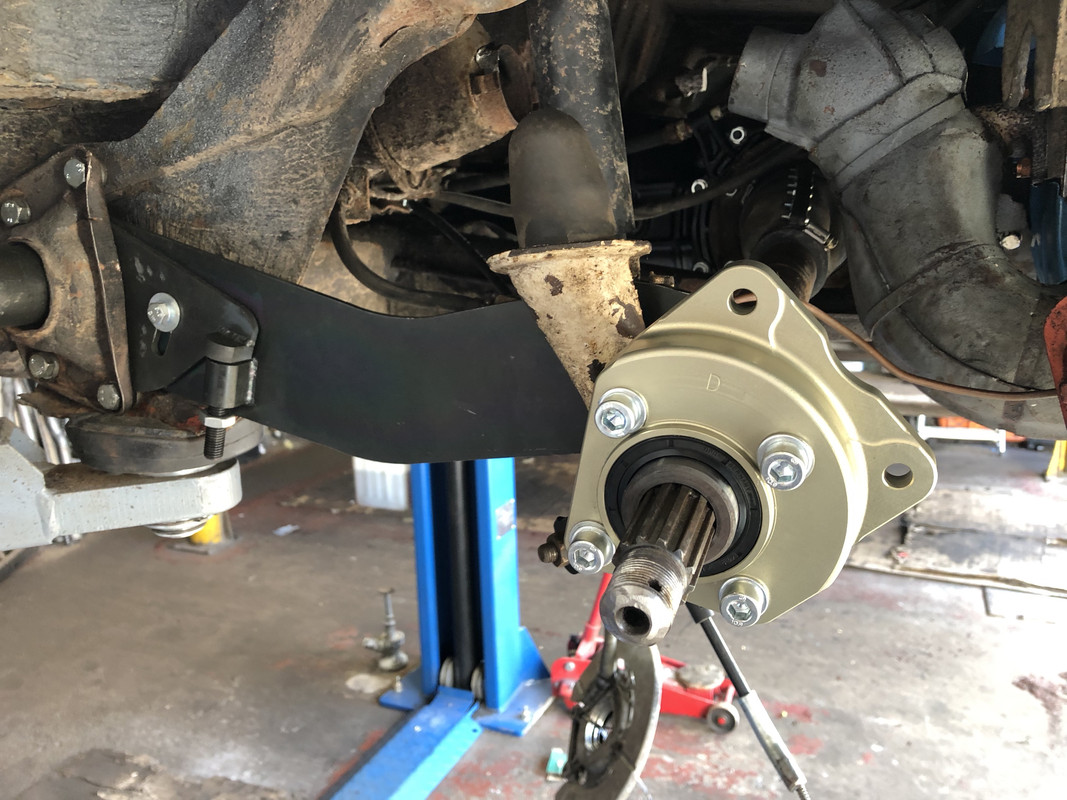 Another day of torment.

Handbrake - check
Gearshift - sort of
Bleed brakes - almost, bit of a soft pedal, but hopefully it'll come back after the new pads have bedded in.

But the 7" teledials are on at last. A lot of work just to get an extra inch of clearance either side. 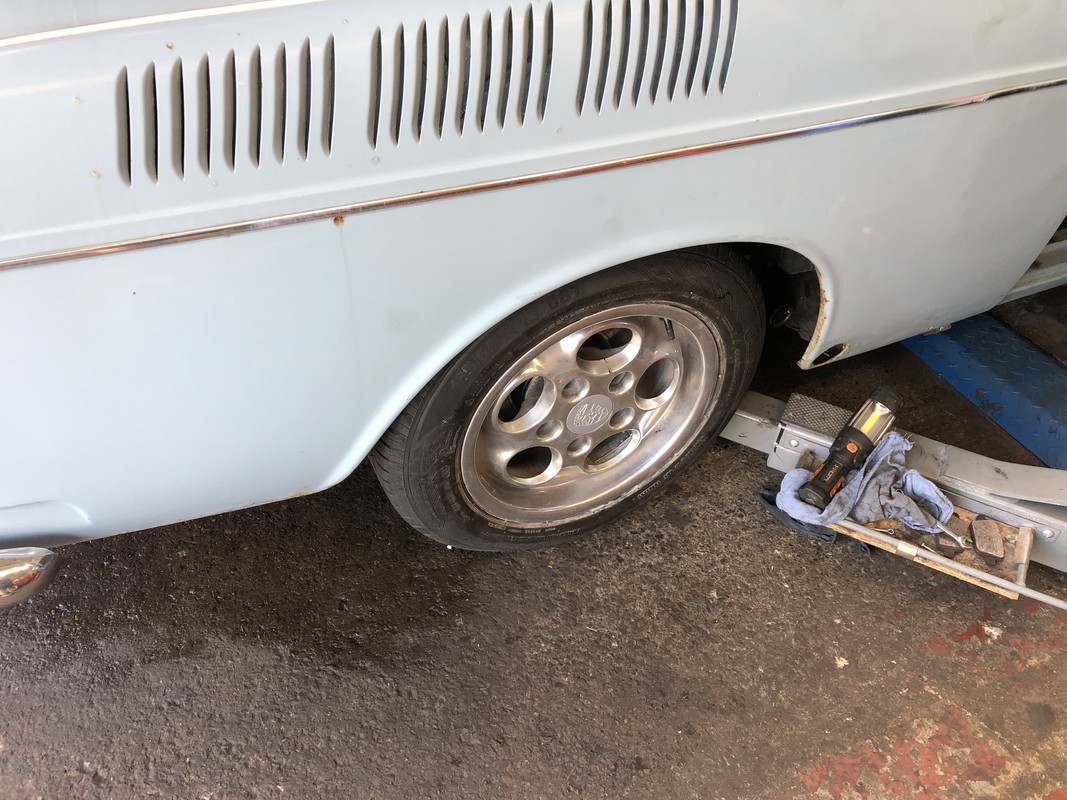 Only issue is the inner rim rubbing on the bump stop metalwork, but that was easily sorted with a grinder and a lump hammer.
So nice to drive around the block at last, all of 200m.

Lopped most of my bumpstop metalwork off too, to get 17x8 bbs rs under the fastback..
Top

Another day working on the square. Should be coming home on Monday morning fully road legal.
Gearshift slightly improved but needs more fettling, hopefully as the gearbox runs in it will loosen up and get better.
Brakes still soft after much bleeding, and again hopefully when the pads and discs bed in the pedal will come back.
Pics of rear setup, inner rim still rubbing on chassis so 10mm spacers fitted. 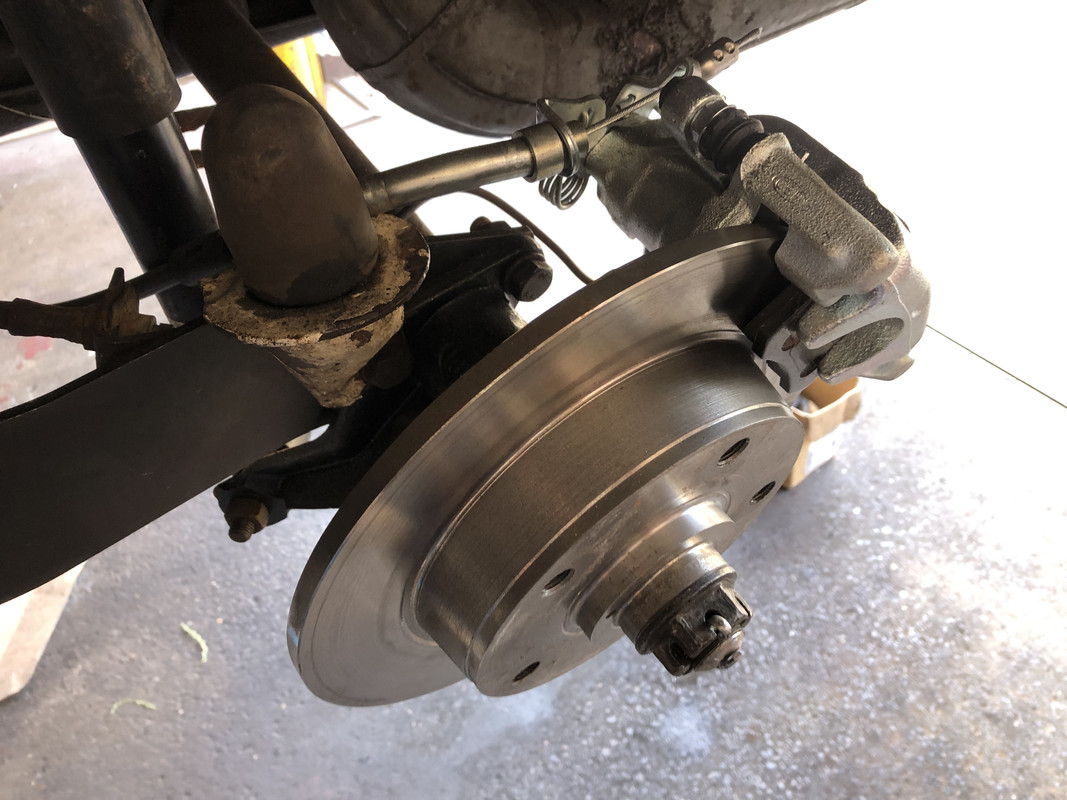 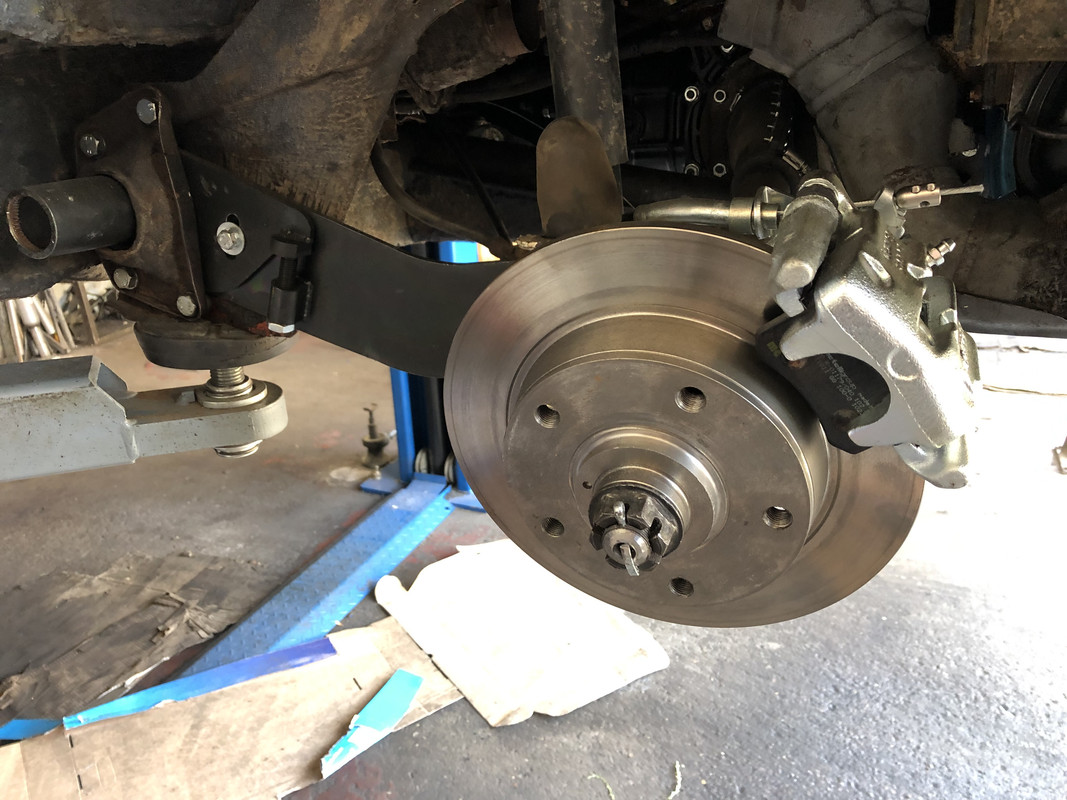 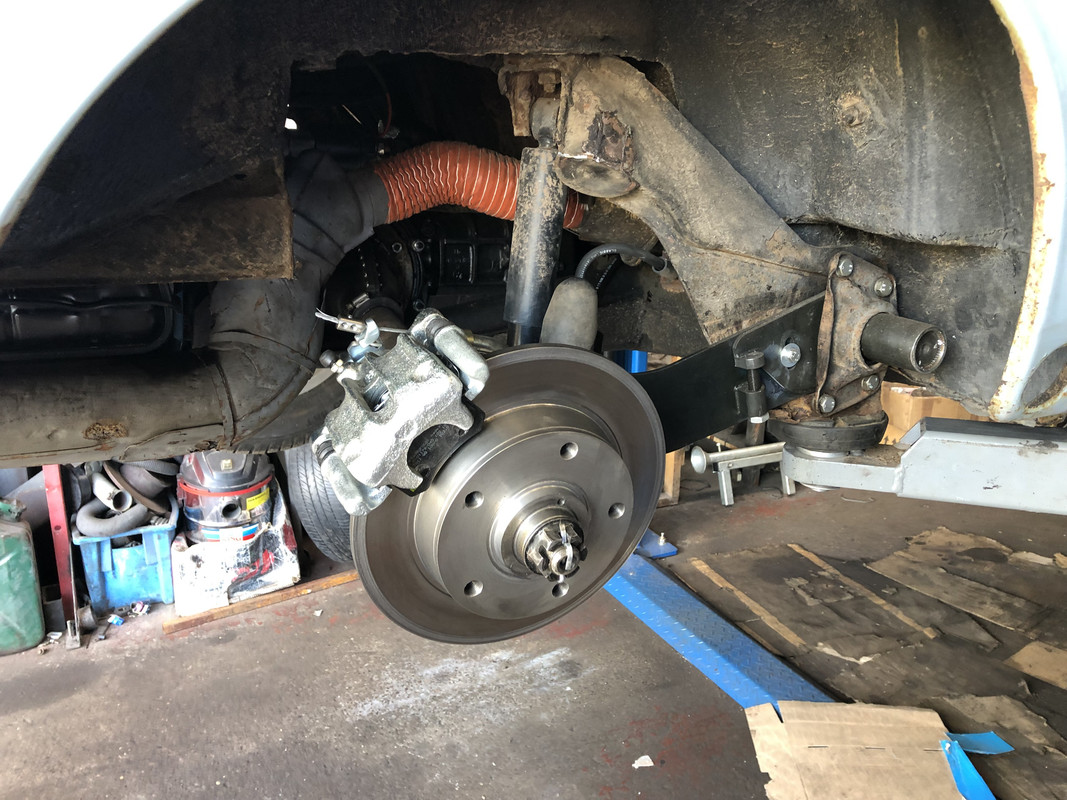 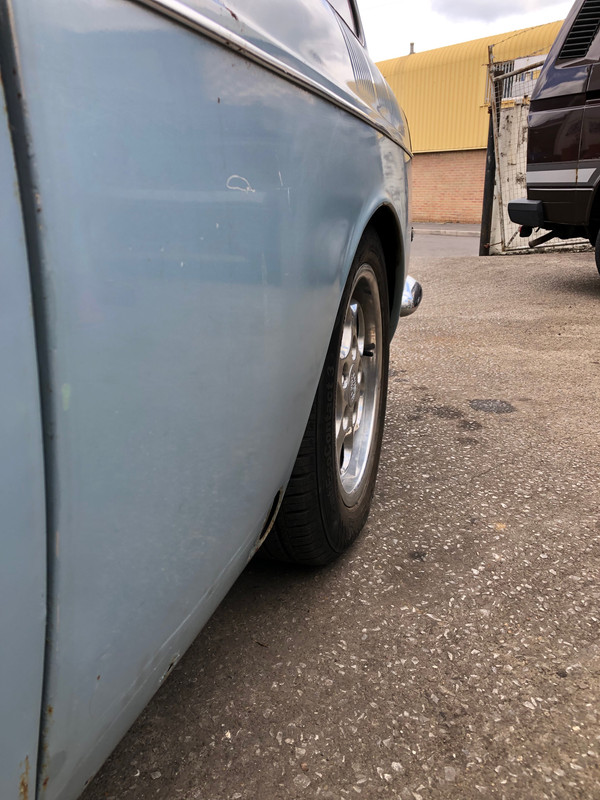 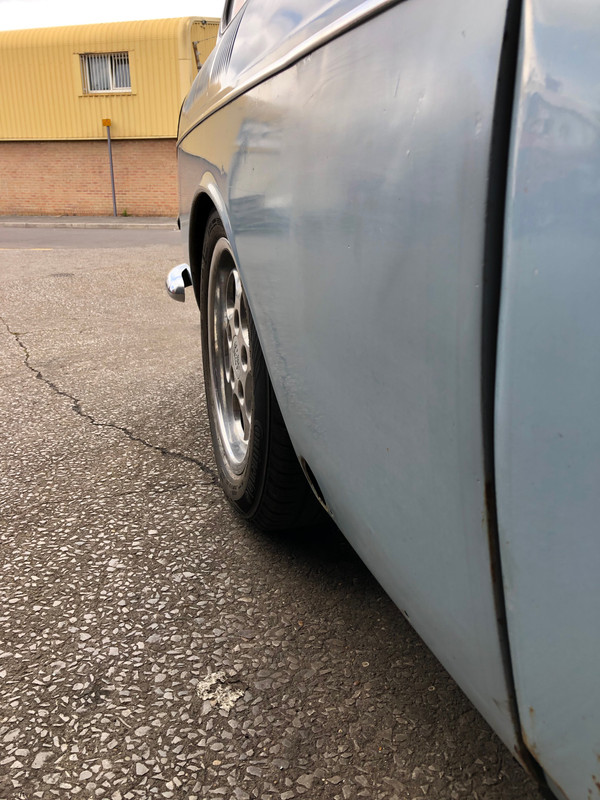 Teledials cleaned and polished ready for front tyres. Just need to give the rears the same treatment when it comes home. 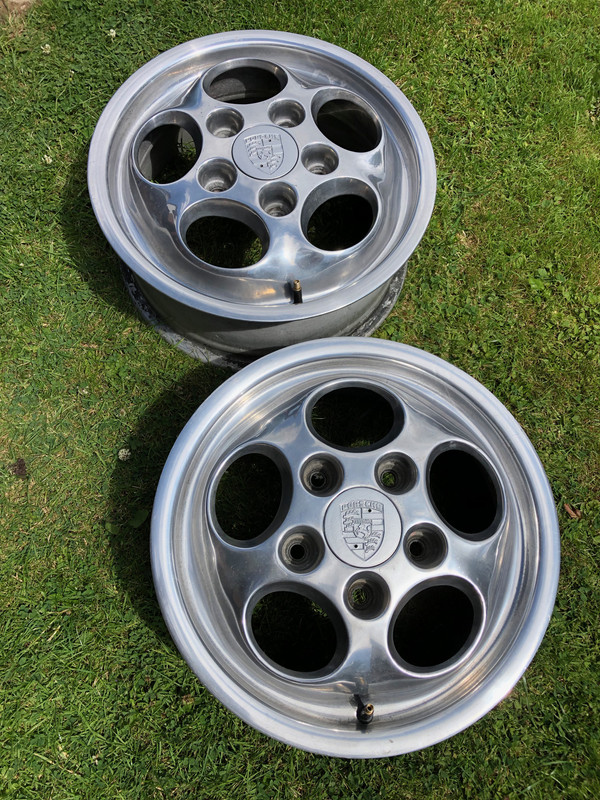 That looks a very tidy set up! Doesnt look heavily modified, nor does it look a nightmare for future maintance like most mods seem to. Top work!
The sultan of swing
Top

It's funny, you have variable ride height on the rear of your type 3, in a similar way to the front of a torsion bar 911. Both get adjusted with a threaded bolt.

broady_6 wrote: ↑
8th July 2019 - 9:11pm
That looks a very tidy set up! Doesnt look heavily modified, nor does it look a nightmare for future maintance like most mods seem to. Top work!

One of the reasons I went for the CSP kit, low maintenance and all service parts available from VW.
And the only disc set up that will fit short spline axles.

Is that other bolt a camber / toe adjuster ?


Yes, adjustable height spring plates. Got similar on the back of the bus.
The other bolt is a clamp, when loosened the spring plate will drop lower to assist wheel removal when the suspension is set really low.
http://cjmotors.info/

Squareback washed and a bit of additional external and internal bling.
Rear teledials cleaned and polished, still waiting on tyres for the fronts. 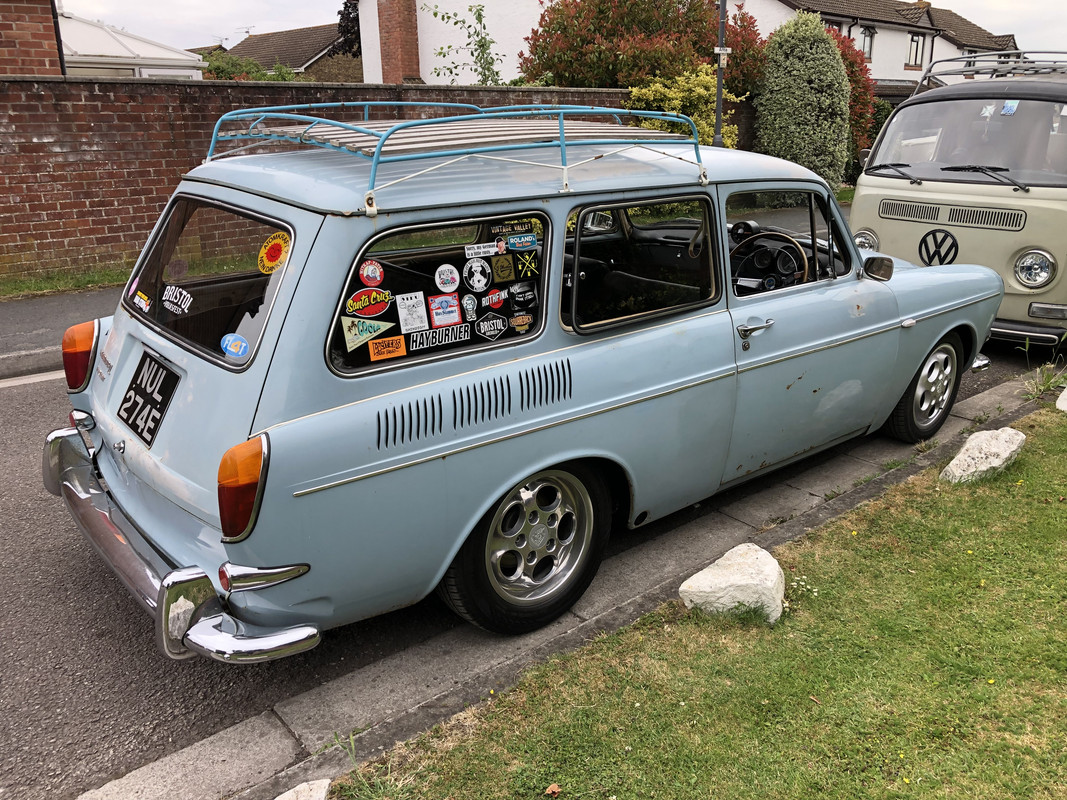 Early Berg locking shifter for the interior, bit of an eBay score there. Transformed the gearshift as well. 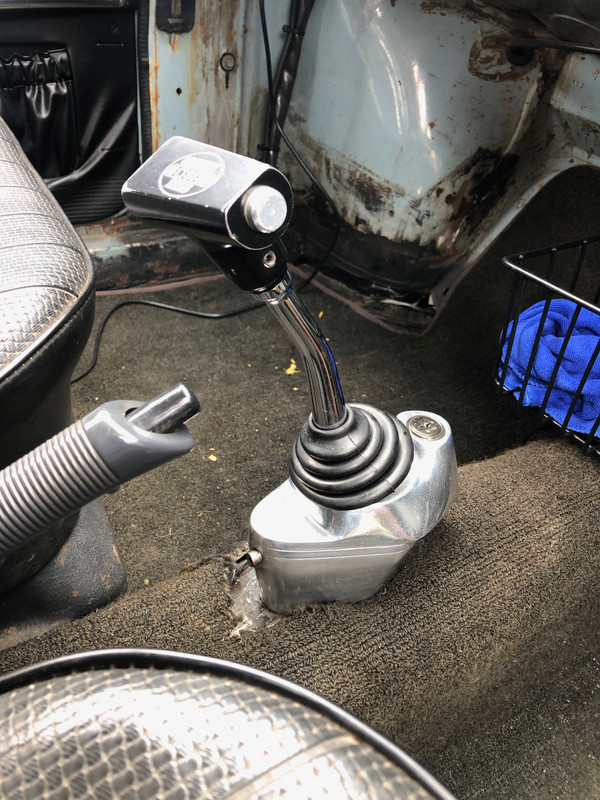 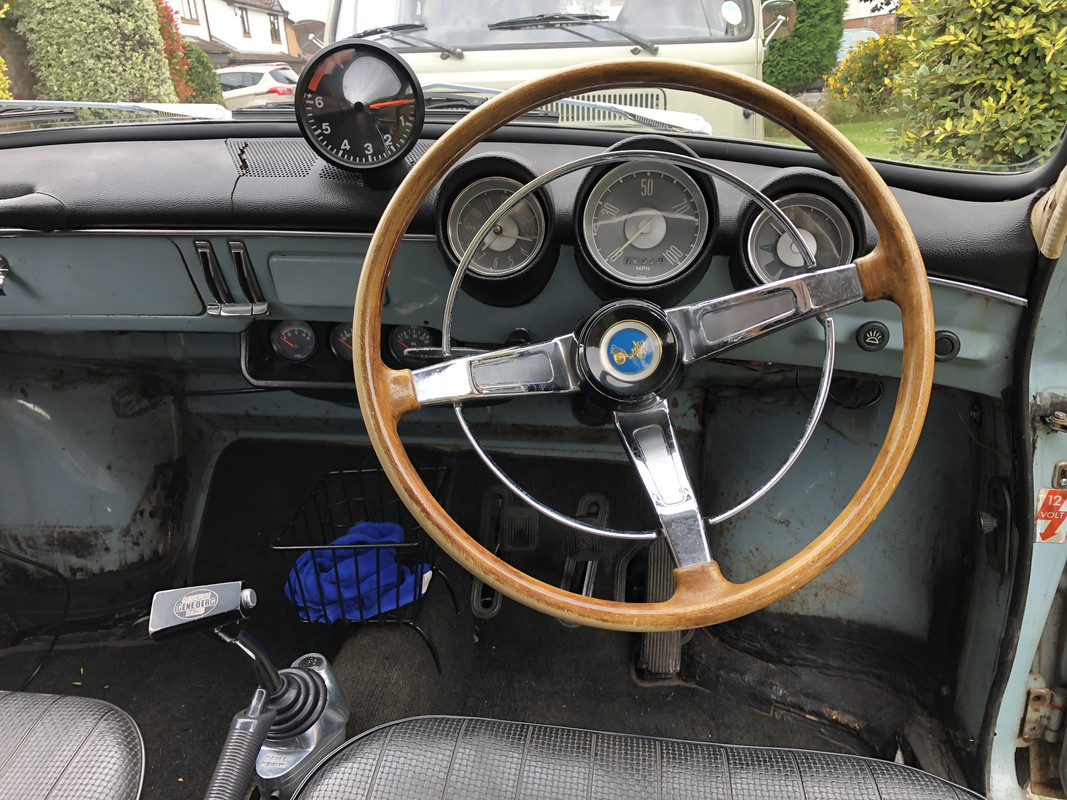 The sultan of swing
Top

The Berg shifter is awesome Jim. No slop or play and reverse is only selected when I want now.

love the coach wheel - nice choice. I bought a knackered one and painted the rim white but think the original finish looks great in a T3.
The variant Project
Top

Surprise reversing is an exciting way to live! I agree with the above too

The sultan of swing
Top

Hi Simon,
The Square is looking sweet! love the updated gear (Brakes, Locking Berg and that steering wheel).... oh and love the tele dials polished up.

Must get up to Bristol with Lewis next year to catch up.

Take care. Adam.
"Where duz he get those wonderful toys?????"
Top

Hello Adam
Need to get my finger out and sort the gearbox/brake problem, got a couple of family issues ongoing at the moment though.
http://cjmotors.info/

The saga to date.
I haven't driven the car more than 20 miles since the gearbox was installed due to the drivetrain issues. It's just sitting on the road outside the house deteriorating.
But last weekend I finally managed to get it down to Nick's and use his facilities to remove the offending transmission. 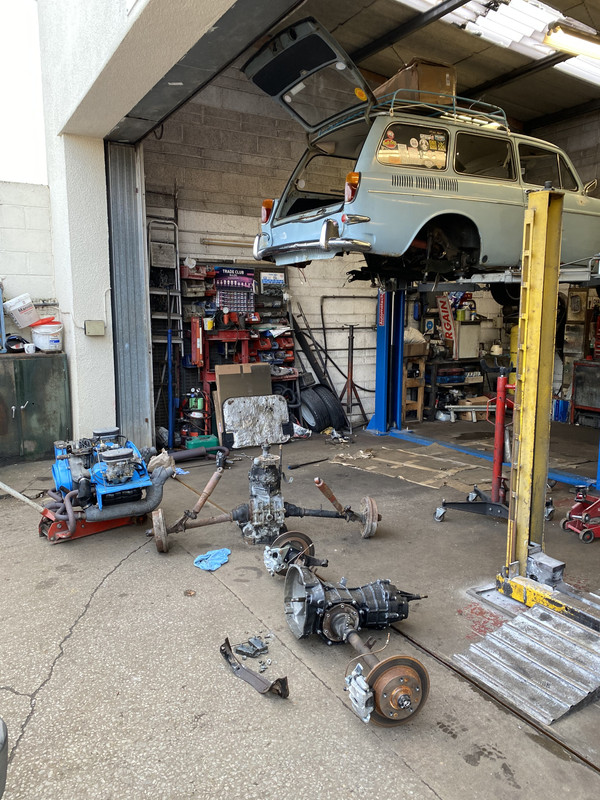 The plan was to borrow a Beetle transmission, change the nose cone and fit that so I could use the car.
However, that plan has gone down the pan as well as it seems to be stuck in 3rd, so it was dragged back home and parked back in it's spot annoying the neighbours. 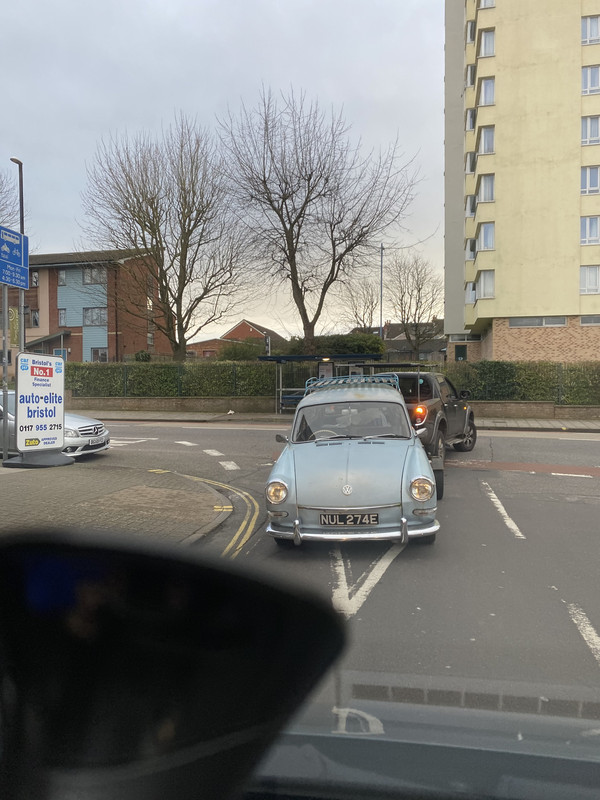 I'm planning on taking the new transmission back to the builders to be sorted in the next couple of weeks.
But I'm still undecided on the squareback's future to be honest.
http://cjmotors.info/

Gotta be worth keeping after the effort you've put in, and parking it up at this time of year wont do it any halm. Mine hasn't moved since the end of October. Well that's a lie, I run it up and down the drive just to keep the cobwebs out.
The sultan of swing
Top

Seriously, I agree, I couldn't see immediately what the issue with the drivetrain is so could not offer any suggestion for fixes, but though a gearbox is a big bit of kit to put in and out, they're not that hard. My main worry would be that there is something more fundamental related to the fitting of the non standard stuff ??
David
1974 412LS Variant
1973 412LE 4 door Fastback / Saloon
Top

I think that the biggest issue is with the rebuilt gearbox and/or the fitment of the axles/tubes.
You could select gears easily enough, but when driving a loud aggressive banging and shuddering would happen at wheel speed. It was random at first, but happens all the time now.
I'm off to Stoke-on Trent in the morning with the transmission to hopefully get to bottom of the issue and repair it. 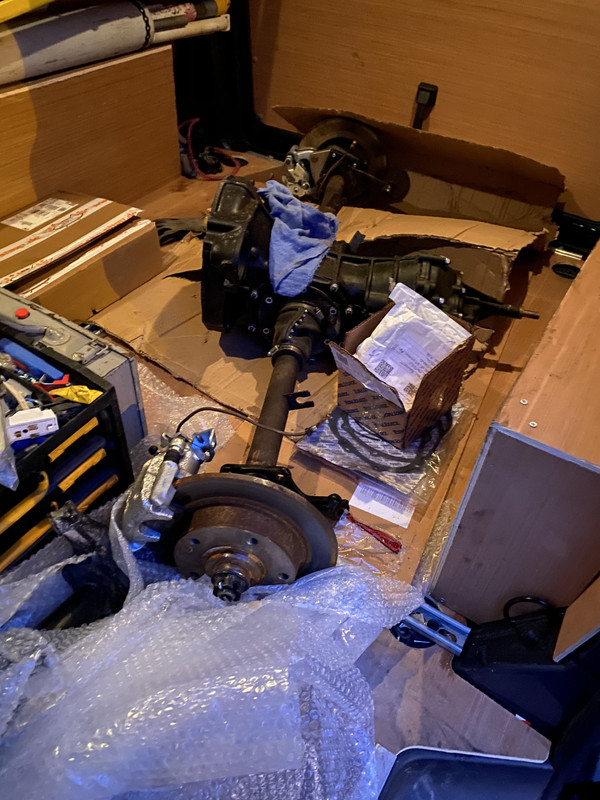