937carrera wrote:You might find this link to a German brochure for the 1974 model year useful

Looks like Tropical Green is the right colour, and the interior could have been black, bamboo or mocca originally.

Documentation is always welcome surprise and I didn't have this one earlier, nice and thank you!

Amount of cars & other vehicles tend to increase at good times and decrease at the bad times. Now it's relatively good times so I've been able to buy some new and have major repairs to older ones. One constant problem there always is: Not enough good storage as anything left outside will rust & rot away way too fast.
Kharon - '61typ2, '63typ14,'65typ34 & '74 412
FVWA.fi Support Group
Top

I had some time during the week so I used cleaning wax and machine for two rounds on paint and ordinary wax one round and now the car looks much better.

Also got the floor carpet from US (front floor, no wheel wells or rear part), it looks and feels very good. It has some mouse damage on edges but the car isn't perfect either so it fits perfectly.

Pics of the car already updated, pics from the carpet will appear soon and pics when installed later as I washed it and it's dripping wet now. 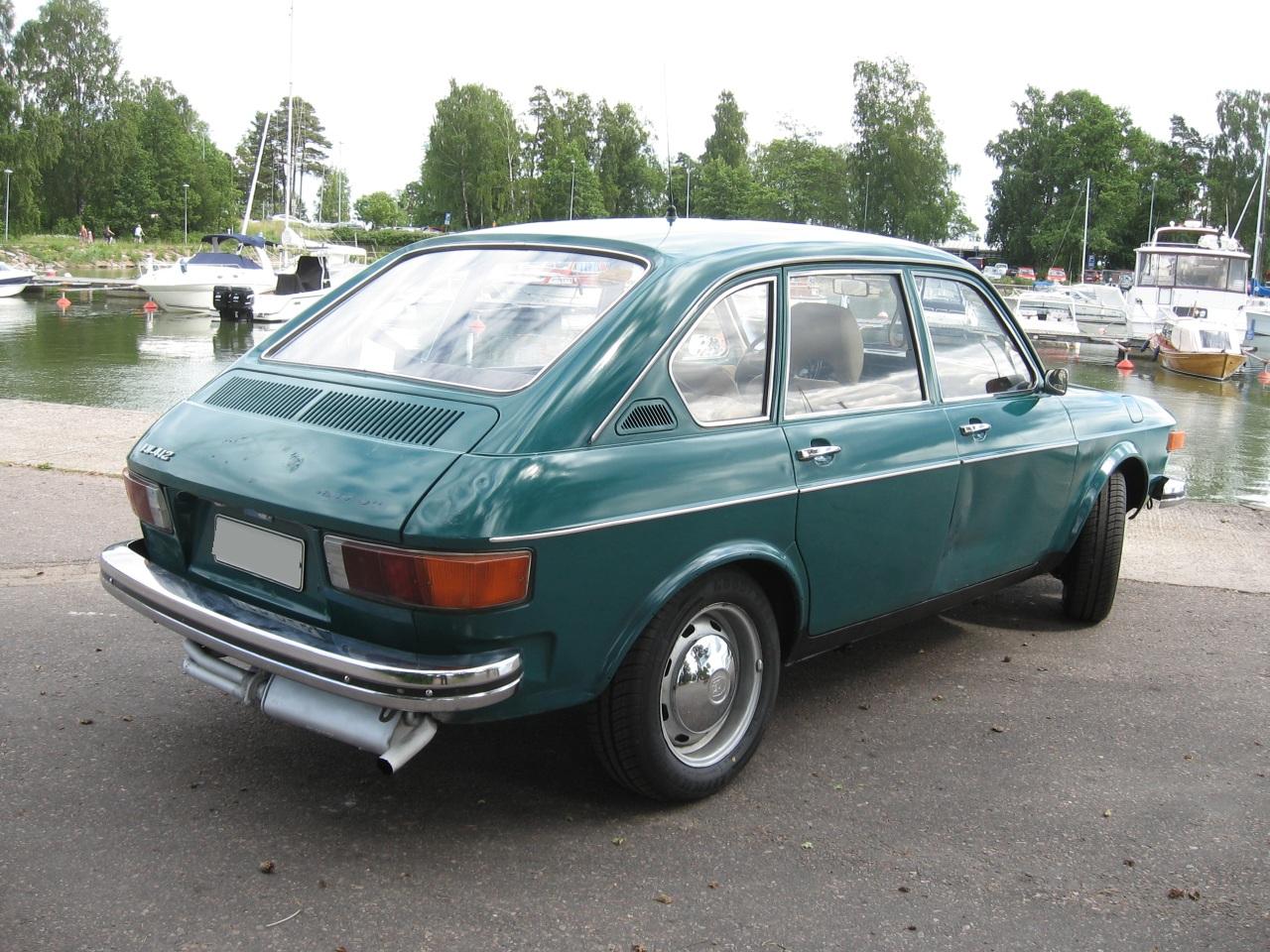 I also washed the sill trims and those aren't too bad, after washing: Front trims aren't as good but the change of colour is as much (some scratches in coating). Anyway, I'll install them as soon as I get the carpet in the car.

I also managed to break alternator belt. I knew it was bad but I didn't know it was that bad. Anyway, local FLAPS helped and now I've new belts (I bought 2), 4euros per piece. I've good battery so no problem and I drove home.

New belt installed, nothing major except the alternator upper bolt lost its nut as I loosened it a bit too much.

We'll see, I needed big tools to turn the alternator at all, so it might hold with just lower nut tightened.

Carpet installed, looks good but it is smaller than I thought (and side carpets respectively bigger). 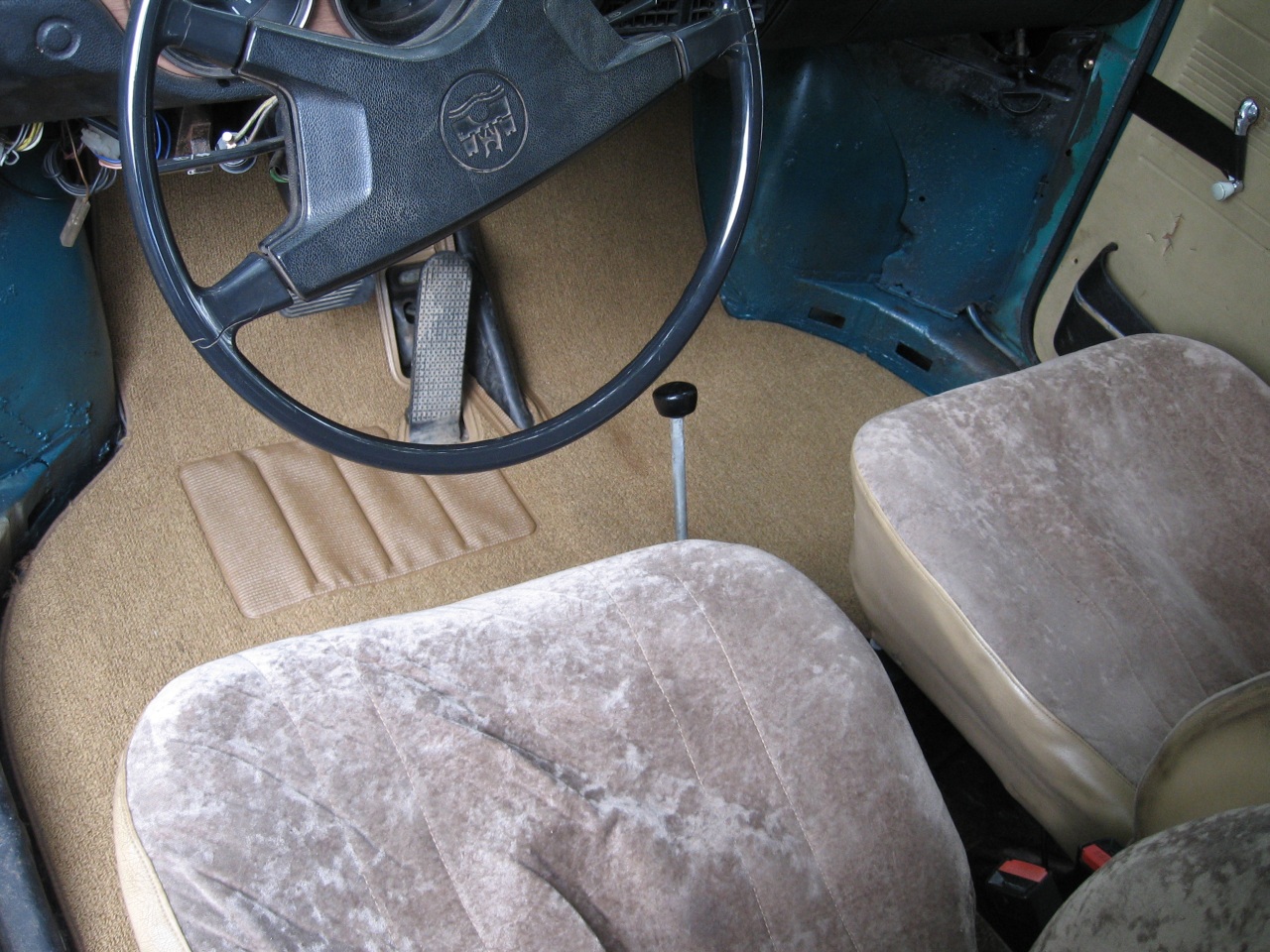 I also got help from friends with swapping the idler arm bushing. Hopefully that and a NOS (hopefully still working) steering damper (I got with the car) help with wobbling steering.

That takes a while so I've been working on small KG: Got it inspected and while the 412 is in the shop, it's my daily driver.

Steering lock switch swap from a spare steering column next as the starter switch is broken and replaced with a button now. Not pretty.
Kharon - '61typ2, '63typ14,'65typ34 & '74 412
FVWA.fi Support Group
Top

Old steering column was a bit rusty so I swapped whole column from spare part stash.

I still had to swap steering lock (to keep the key) but not too hard when you have whole column out of the car. Got rid of the button and have start from the key like it should. Nice.

I also enforced (as the one I had, was broken from three places) and installed the cardboard underneath steering wheel and small tray between fuse box and steering column.

One layer of fiber glass carpet and some epoxy:
http://kharon.suomiforum.com/www/412/IMG_3624.jpg

Removed fresh air fan as it wasn't working, got it working on desk (just dirty and bad contacts) and put it back with new seals on air flaps: Old foam seal was literally crumbling when I touched it and there wasn't much of that left, so I removed it and used 2mm rubber plate to replace it. Seems to work, now the flaps don't leak air.

Fan box is slightly leaking between box and body, but that's something I can seal from outside of the box, nothing major.

Getting power to fan was an episode by itself: Where are the wires and which wires? Basically none was visible.

Wiring chart told me that rear window heater switch is in same +12V wire and starting from the switch I eventually found that there was a neat roll of black wire, behind dashboard. Good, +12V to the switch is here.

Also it told me that ground is connected to somewhere via a long wire and I should have loose ground wire (brown) hanging somewhere underneath the dashboard and it was, almost at fuse box so I didn't see it at first time. Another of those VW oddities: Ground wire is brown and black is used as a power wire.

Now the fan is also working and some fan is nice to have, just to defog the windshield in city traffic.

Bushing swap helped a lot, it's much better to drive now. Wobbling is still there at some speeds but very mild and above 60mph basically none.

The engine is getting quite noisy though at those speeds .. I think I'm missing most of the sound insulators from engine bay and elsewhere. We'll see.

As I have two Tropic Green Variants if you have N6N6 repeated at 90 degrees, on the Green Construction Plate, mounted next to the VIN Plate, then it's Tropic Green.
73 de Wayne M5WJF

Dave:
Sumatra green is a bit lighter green. From a paint sample it's very hard to see any difference, but when you have both on car, side by side, it's different even for an amateur like me.

Wireless: The section of inner fender around VIN-plate and colour code was rusted away and was replaced by new steel by previous owner so no remains of original colour code is left. But now the front fenders are painted with Tropical Green and to my eye they look the same as the rest of the car. (See http://kharon.suomiforum.com/www/412/ )

I'll go and show it to a pro painter in next summer, we'll get something by then.

But happy news: I almost got it inspected at first try, only one tie rod outer end was bad and happily that is a general VW-part, so I got one from the local VW shop shelf (all 10 euros) and replaced it yesterday. So I'll get it inspected on Monday, nice. No panic as the old inspection is valid until 2nd of November.

Also found a garage for it for winter, only 60km away, at my sister's house. I haven't fixed the heating yet so it will be a cold ride to there, it's around 5C here at day time.